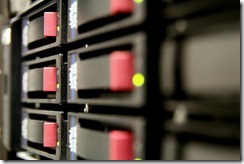 Some would say that I’m overly organized when it comes to my images and videos.  But after years of converting all old media to digital and taking roughly 14,000 images a year; a workable system is required.

I know that I’ll regret writing this, but…I’ve personally have never had a hard-drive failure.  I’ve had them at work on both client and servers, but never on my own personal machines.  While I’ve been lucky, it doesn’t mean that I’m not cautious.  I’m sure you’ve heard the saying, “It’s not if your hard drive will fail, it’s when.”

Most people that I’ve talked with, do perform some kind of backup periodically, but by no means on a scheduled basis.  Additionally, most simply back up there important files to DVD or other optical media and store it away in a closet. This does not help in the “worst-case scenario” situations.

For me, this would be fire to my home.  Both my computers and local backup device are located in the open air in my office.  While I have “tried” to keep annual copies on optical media in a fire-proof safe, I’ve been less than vigilant doing so.

I take a lot of photographs and video, most of which are with cameras that are 8MP or more.  This creates a large amount of data.  Actively working on this data across my network to my Network Attached Storage (NAS) devices is just not feasible.  I need the files to be easily and quickly accessible on my laptop.  Therefore, it has to be my primary storage device.

My laptop is connected to my network daily (if I’m not traveling), therefore it makes the most sense logistically to have a onsite backup.  For this, I have a large 2TB external drive running as a NAS via a Belkin Homebase device.

Each week, I run a simply batch file that mirrors the relevant directories from my laptop to this external hard drive, using RoboCopy.  This drive is not encrypted and is available to all family members on my network.

For off-site storage, I perform the same actions bi-weekly, but with a drive I keep at my desk in my office at work.  My work location is approximately 20 miles from my home and is considered a secure facility.  This drive is fully encrypted using TrueCrypt.

While to some this may seem excessive, it is in fact the standard backup policy most organizations (should) follow at a minimum; On-Site Primary, On-Site secondary, and Off-site/Encrypted Tertiary.

If you have not yet taken a serious look at your potential for data loss and your recovery plan, do so soon.  When “the shit hits the fan”, it’ll be too late to save those priceless images and videos.