Jennifer and I wanted to get away for the president’s day weekend.  Normally, this is a snowboarding weekend, but we decided to make it a little getaway.  We were not really sure where to go, as the weather was not ideal, so we thought we’d try a couple nights in the cold camping in NARV at Skidaway Island State Park, near Savannah.

We drove up Thursday morning, checked into the campground, then headed out to dinner at Sweet Spice Restaurant, which was highly recommended on Yelp.  After dinner we headed downtown to partake in a midnight ghost walking tour of Savannah with Blue Orb.  The tour was quite interesting, as it focused more on the history and facts, rather than just telling ghost stories.

Friday we signed up for a trolley tour of the city, to get our bearings on what was where.  It was one of the hop on/hop off tours, so it worked out really well.  For lunch, we ate at Zunzis, which was quite good.  Afterward we hit Leopold’s Ice Cream, a Savannah staple.  For dinner, we drove to Sweet Potatoes Kitchen, which was featured on Man vs. Food, which on the show the claim it to be the best Banana Pudding on earth.  It was good, but Lloyds in Titusville, still takes the prize in our opinion.  The one thing that was outstanding were their biscuits.  While they didn’t look the same, they tasted EXACTLY like my grandmother used to make.  It was a taste I’d not experienced in over 20 years.

Saturday we explored the area outside of Savannah, first visiting Ft. Pulaski, then to Tybee Island.  For dinner we ate at The Crab Shack, which was very good and a great deal for the price.  We both got the low country boil.  Later that night we drove to The Diner on Abercorn for dessert, before heading back to the campground.

Sunday we spent the day doing our own walking tour of downtown Savannah.  It was much more crowded than during the week.  We couldn’t even get a seat anywhere unique for lunch, so we ended up eating a Panera.

Monday morning we packed up camp, what of it there was and headed back south to Rockledge.

Campground-wise, there isn’t much I would do differently.  The campground is gorgeous and all of the sites are secluded.  As for Savannah, I would plan on hitting downtown only during the week, as the crowds are just too much. 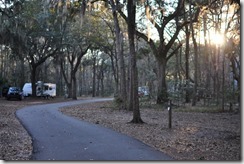 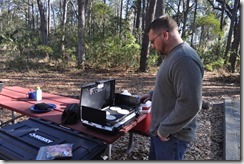 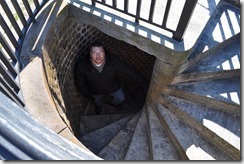 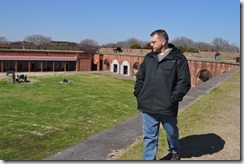 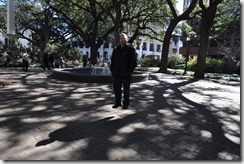 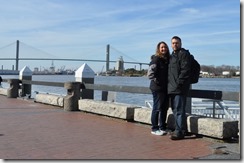