Trying to get to Trevor’s AF BMT Graduation 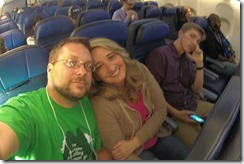 This weekend was one in which we’ve been hoping and waiting for, for over a year; Trevor graduation from Air Force Basic Training.

Our trip started out smooth on Wednesday afternoon.  Dropping off the car and waiting for our departing United flight from Orlando.  Checking FlightStats.com, I saw that there was a ground delay in Houston, our connecting airport.  So I predicted that our flight would be delayed.  A few minutes later this proved to be the case.  I checked with the desk, to ensure that we would still make our connection and was assured that it wouldn’t be a problem. Ha!

It turns out that everything in Houston was delayed, including our connection, so we were able to get on it with no issues, albeit late.

After that connecting flight pulled back from the gate, it just sat there….for another hour…until they announced that there is an issue with the air speed sensor and we would be returning to “a” gate.

At this point, it is honestly doubtful we will be making it to San Antonio by plane.  I checked pending departure flights, and there was only one left.  So I began a contingency plan of altering my rental car reservation so that I picked it up at Houston and just drove to San Antonio.

So back to the gate, and we unload, no one sure of what we are doing now.  After about an hour or so, right before I pull the trigger on my rental car plan, it is announced that there is another plane…at the other end of the airport…at the gate near where we originally left from.

So we all get to that gate, and wait, and wait, then finally get started loading.  Then they announce that we have to load EXTREMELY fast, otherwise the flight crew will “time out”, and then it would be cancelled.  You’ve got to be fucking kidding.  So everyone complied and loaded quite rapidly.

This new plane pulls back and taxies out, then just sits…for another freaking hour before taking off.  I have no idea why.

We finally arrived in San Antonio four hours past our original planned arrival time, on a flight which was one of the worst I’ve ever been on turbulence-wise. Then we go to get our checked baggage….and it isn’t there.

Apparently, they put the half of the luggage from our switched flight on a later flight to San Antonio.  And because most of our clothes we needed for the next day (ahem…I mean in a couple hours) were in them, we had to wait…until 2:30AM.

Finally, with our bags in hand, we head to the rental car bus (which we had to wait an unreasonable amount of time for).  Being an Avid Preferred member, I was thinking…finally…from here on out it will be easy.  Not quite yet.

The main benefit of Avis Preferred, is that you don’t have to wait at the counter.  You just get off the bus, walk to a car and drive away.  So the bus driver asks who is Preferred, I raise my hand, he drops us off, we unload the bags, then I look at the car assignment board.  They ALL have an error code, which was clearly visible from the bus driver’s seat.  So we yell at him not to leave, and we load everything back on the bus, to go to the counter just like everyone else.  All of this, while the bus driver is giving a “tour” of the grounds, explaining this is where so and so, and this is where so and so is.  It is raining buckets and it is dark out…we cannot see shit.

With it being so late, there is only a couple of people working the counter.  I get in line, roughly forth in line.  The first one keeps getting keys to cars, looking at them, then coming back for another.  The second group in front of me cannot speak ANY English and the other is a couple of guys from Eastern Europe who want everything completely explained to them…slowly.  The Avis employees see these non-native speakers as an opportunity and upsells these people (both) on EVERYTHING, which takes an exponentially longer time.

Finally, I get to the counter.  I say I’m Preferred and I’ve reserved a full size.  And guess what? They don’t have any. FML.

The other work sees our frustration and says, just give them anything.  So they offer a Suburban, a Mustang convertable, a BMW, etc.  I tell them basically, just give me a set of fucking keys, and we end up with a BMW 328, which is way more car than I want.

On a positive note, the traffic from the airport to our hotel was amazing,  as one would expect for this early in the morning.

We finally hit the bed and got roughly 60 minutes of sleep before we had to be up to get on Lackland for the Airman’s run….which is in the next blog post.

While the night was a consolidation of problems, many of which were outside of the airline’s control and/or in the best interest and safety of it passengers.

But other problems were not; Baggage Mishandling, Idiotic Bus driver.