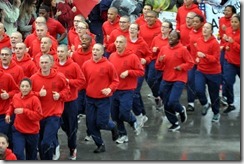 After our ordeal just a few hours earlier with travel, we were tired this morning…to say the least. We ended up only getting about an hour or so of sleep, before we had to head to the base for briefings and to get a good view for the Airman’s Run.

The BMT reception center is quite impressive. And considering the number of people that flow through every week for their airman’s graduation, they manage the logistics very well.

We attended the early briefing that went over the activities for the weekend. Right outside of the auditorium, there are screens which show the airman assignments to their “heritage flights” for the weekend’s activities. The board even notes changes, so we trusted it, as it “obviously” had the most up to date information….this was a mistake.

During the run, we never did find him, so I just filmed EVERYTHING. After it was done, I went back through the pictures on the camera and finally found him.

After another hour or so, the flights marched back in formation for the coin ceremony. Again…we can’t find Trevor. With my camcorder and 200mm zoom lens on my Nikon I’m frantically searching the flight he is supposed to be in, and he is no where.

At the end of the coin ceremony, the airman stand at parade rest, until a family member “taps” them out, which allows them to leave formation. We had NO IDEA where he was. Not even which flight he was in.

We ended up splitting up to try to find him, but he found someone else to tap him out, and he found us instead. Jennifer was so disappointed, because the “tap out” was one of the things that she was looking forward to the most. 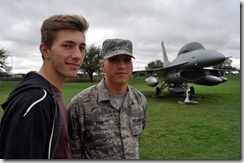 Trevor looked so impressive and proud, a sentiment shared by us all.

For lunch, we headed to the Gateway Club. They had a buffet, which was actually quite good. Afterward, we explored the planes around the parade field.

It was hard to say goodbye to him, even knowing we would see him again tomorrow. 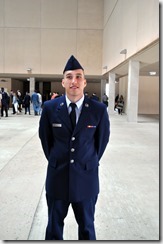 Because of the rain in recent days, the parade field was like a marsh. So instead graduation ceremonies were held at each of the individual squadrons; Trevor’s being the 320th. While there were some snafus with busing everyone to the squadrons, it actually worked out better in the long run because we were able to sit closer to the flight for pictures and video.

After the graduation, Trevor showed us around his dorm. HOLY COW, these things are like the Hilton compared to the dorms I were in in 1995. Everything was brand new. Trevor said that last week he had his detail changed from Latrine to Hallway crew, because the latrine leader and him didn’t “meet” eye-to-eye.

He received his orders for Tech School and he will be going to Ft. Lee in Virginia, not staying at Lackland. His school is about 31 duty days. So it will be early to mid May when he is able to take leave to come home after finishing.

Today was his first Town Pass. He was craving a sub, so we went to the nearest Jimmy Johns he could find. Afterwards, he just wanted to relax, so we decided to go see Dead Pool at the movies. There were about five other Airmen that had the same idea.

After the movie, we came back to our hotel, grabbed some pizza, and spent time together. He also got to see a little TV and sadly a view of the political shit show going on right now. 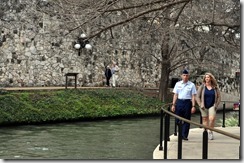 We spent a good portion of the day downtown walking around Riverwalk. We bought tickets for the boat tour, but the lines were too long at the boarding locations, we never used them. For lunch we ate at Rosarios, which has been voted the best Mexican in San Antonio. Trevor didn’t get that burrito he was craving, instead opting for tacos. After lunch, we needed to satisfy another of Trevor’s cravings; Ben and Jerry’s.

Trevor was in need of an additional bag for his move to Virginia, so after leaving downtown, we made a few “hunting” stops for luggage and at the largest pawn shop I’ve ever seen. They actually had shopping carts and the parking lot return. Afterward, we came back to the hotel so that he could kick off his shoes and relax. Those that have worn it, know that dress blues 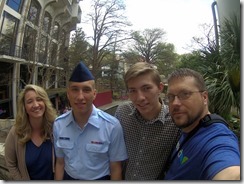 and shoes are not the most comfortable attire to wear for a walk-about. He was able to get on his tablet for a little while, so if you are friends with him on SnapChat, you probably heard from him.

For dinner, we indulged in some Greek fare, including baklava at Mina & Dimi’s Greek House, which was amazing. Brandon already said that this is the place we are eating when he graduates basic training.

For our final day with Trevor, he was limited to staying on base.

We started out the day, meeting Trevor at the Atheist/Humanist “Church” service that is now being held at Lackland. Apparently this meeting is the only one in existence at any of the military service’s basic training bases. And this one is growing very quickly; just a week or so prior to us going, it had to be split into two “services” to handle everyone. I wish a service like this existed when I was here. Until now, if you didn’t go to a traditional “church”, you were basically punished by having to stay in the dorms. This not gives the “nones” a place to go.

Trevor had to get a few supplies in preparation for dorm move the following week, and for his travel to Virginia. So after a very lackluster lunch at the BBQ joint on base, we did some shopping at the BX.

Our flight back to Florida was in the afternoon, so we had to drop Trevor off a little early at his squadron to make out flights.

The last time that I stepped foot on Lackland AFB was ironically, the day Trevor was born. Jennifer went into the hospital when I was moving from Basic Training, to Tech School at Sheppard AFB. This fact, along with the fact Trevor is almost EXACTLY the age I was when I enlisted and graduated, makes this eerily familiar. I still contend that joining the AF was one of the best decisions of my life. I hope Trevor gets the same or more value out of it, as I did.

For Trevor, this graduation weekend has been a long time coming. He has worked very hard at both trying to get into the USAF and graduating this weekend. We cannot convey just how proud we are of him.

While things are working out exactly has he planned, job-wise. He is taking it all in stride and always looking at the positive and keeping focused on the big picture…and that is all we can ask.